Welcome to the Eastern Fourstroke Association 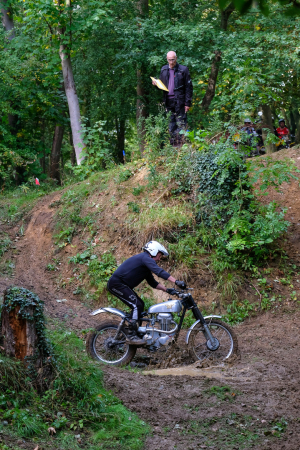 Our members, old and young alike, have an enthusiasm for classic trials bikes and the type of trial that used to be held in the 1950's & 1960's in the spirit of fair competition, the enjoyment of taking part and the achievement of finishing. ﻿Our principal objective is to cater for people interested in Pre 1970 motorcycle trials albeit our club trials are also open to later twin-shock machines as well.

We also organise, throughout the year, several other ACU regional restricted, closed to club and AMCA ‘open’ trials held at a number of venues throughout north Essex and south Suffolk under the umbrella of the ACU and AMCA. The main trials of these being the Roger Birch Memorial Trophy Trial, the Dave Bickers Trophy Trial (a charity trial whose proceeds go to the Leonard Cheshire Disability Charity) and the Boxford Bash trial (whose proceeds go to the local Boxford Scouts on whose land the trail is held.)

The ACTC occasionally organises Summer Trials on Saturday afternoons which are open to all trials bikes from Rigids to Mono's. Sections at these trials are firmly aimed at just having a bit of fun and for those starting out in the sport, so nothing requiring superhuman skills. All profits from the Summer Trials go to charity.﻿

The Club has its own magazine called Trials & Tribulations which is published on a monthly basis in time for club night held on the first Tuesday of the month at The Alma pub in Copford near Marks Tey, Colchester, Essex. You can also find archived under the Trials & Tribulations page some 200+ past copies of the magazine, many of which were produced and edited by the previous editor, Jim Woodmason, who retired from the editors post on his 200th edition in December 2010.