Eastern Fourstroke Association is a club with a long tradition of running classic trials in the spirit of the 50's and 60's.

We don't differentiate between our members. Anyone is welcome to join us.

We're always happy to welcome new members who are interested in joining in with club activities or helping us organise events and being part of our informal club run more akin to a co-operative.﻿ 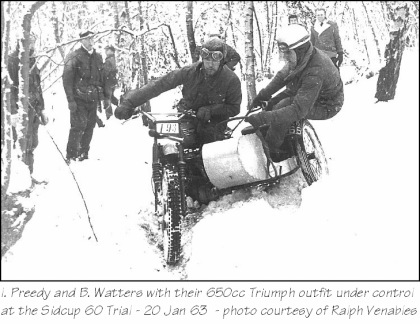 During 1979/1980 Ian Preedy, having given up the modern trials scene, approached a few of his friends, also in the same situation, with the idea of setting up a ‘sensible trials’ club. It was suggested the new club cater for the old pre65 bikes bringing back the character of the trials held in the halcyon days of the sport during that period after the end of World War II and until the demise of the British motor cycle industry.

And so the Eastern Fourstroke Association was born. Ian Preedy became club Chairman with Brian Fletcher, Ted Smith and Andrew Twead(?) joining him as the original founding revolutionary council members. Ian’s talents were many but as Chairman they were soon exposed as wanting and he was quickly promoted to El President and Ted became Chairman and thus the constitution status quo largely stayed unchanged for around 40yrs.

It’s not been a smooth road. The club, affiliated to the ACU Eastern Centre, has not enjoyed an easy relationship with the Union. This rocky road came to a head in 1998 with the Eastern Fourstroke Association coming short from leaving the ACU by setting up a sister club the Anglia Classic Trials Club affiliated to the AMCA. The arrangement of having the two allied clubs, one affiliated to the ACU and the other to the AMCA, has given substantial benefits to its members in providing an uninterrupted calendar of trials throughout the year. It has also enabled the club to donate more money to charity, due to the lower AMCA fee structure, raised from formally the Bromley Brook Charity trial now renamed the Dave Bickers Trophy trial.